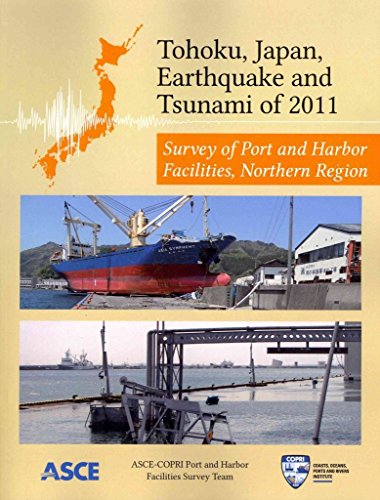 On March 11 2011 the largest earthquake ever recorded in Japan struck off the coast of the Tohoku region. This 9.0 magnitude earthquake induced shaking and tsunamis along more than 2000 km of Japanese coastline and damaged port and harbor facilities from metropolitan Tokyo to the northern extent of Honshu. In May 2011 the ASCE-COPRI Port and Harbor Facilities Field Survey Team worked closely with Japan's Ports and Airports Research Institute to conduct extensive field reconnaissance examining the tsunami and earthquake effects specific to port waterfront structures and ancillary components such as cargo cranes conveyance systems and piping equipment. This investigation focused on the design and construction of these structures with an emphasis on the lessons learned from both failures and successes. Information from on-site observations and interviews with facility owners eyewitnesses researchers and government officials are incorporated into this report. The broad area covered from Soma to Hachinohe in the northern prefectures of Aomori Iwate Miyagi and Fukushima facilitated the interpretation of damage patterns across the region affected by the earthquake with a primary goal of distinguishing port damage due to strong ground shaking from that caused by subsequent and significant tsunami inundation. This report highlights field observations and initiates efforts to develop an extensive collection of geotechnical structural coastal and seismological data. Port engineers structural engineers and disaster risk managers will find the field observations helpful in highlighting the most prevalent port vulnerabilities and the recommendations useful in improving the seismic performance of port facilities and protecting the lives of port personnel.